The Financial Problem with Europe

The Problem with Europe that Investors are Missing by Market Authority

Europe is struggling, and trade sanctions with Russia are making a bad situation even worse.

Confidence in Germany (as measured by the ZEW index) plunged today to 44.3 in August from 61.8 a month ago. This was dreadful compared to the 54.0 expected by economists.

While the plunging German stock market hinted that weak confidence number was expected, this abysmal reading was categorized as “Grim” by Pantheon Economics’ Claus Vistesen. Here’s a chart of the German ETF over the past year: 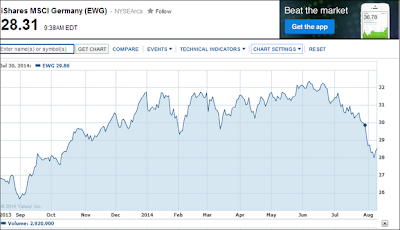 As you can see, the selloff from mid-June has erased nearly all the gains in the past year.

Yesterday, we spoke of the paradox of thrift: the idea proposed by Keynes that total savings in an economy will actually decline if everyone chooses to save at the same time. In order to earn income to save, someone else needs to spend. Your savings is someone else’s spending, and vice versa.

This concept underlies the structural problems in Europe, where a unified currency cannot coexist with a stratified political system. While most investors dismiss Europe’s problems as originating in the social democracies of southern Europe- this could not be further from the truth. It’s a very common mistake to moralize the southern Europeans (Portugal, Italy, Greece, Spain) as “lazy, government-supported wine-drinkers relaxing on the Mediterranean”. After all, if you’ve spent time in vacation destinations along the Mediterranean, it clearly feels like a way of life. 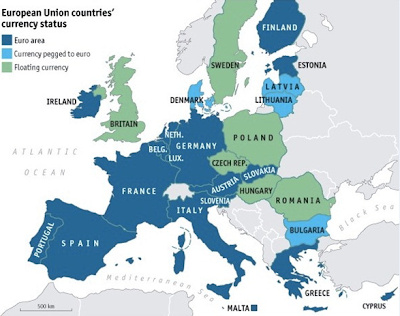 Here’s the truth: Europe’s problems originate in a savings-consumption imbalance that a common currency cannot resolve in the traditional manner of flexible currency markets. I know this is a mouthful so allow me to explain.

In the late 1990s, the German government passed legislation to restrain the labor wage share of GDP. This made their labor markets among the most competitive in the world, increased exports, and forced up the savings rate. When the Euro was adopted in 1999, the fate of Germany’s currency no longer rested on its own economy.

As a result of these programs and a unified currency, German deficits of the 1990s quickly swung to surpluses. Remember, someone’s savings is also someone else’s spending. The belt tightening in Germany caused savings to flow to south Europe. This resulted in an unsustainable rise in consumption in Portugal, Italy, Greece, and Spain. German exports increased and manufacturing shifted from the rest of Europe to Germany. The inflow of capital to Southern Europe ignited real estate bubbles which resulted in even more consumption as sky-high housing prices made everyone feel rich.

Before the Euro, an inflow of German savings into Spain would be resolved by a drop in the Spanish peseta. A weakened Spanish currency would make their labor and export markets more competitive and the trade imbalance would eventually remedy itself. Unfortunately, there is no longer a mechanism to fix these capital imbalances as the currency is now shared by all. German savings gets trapped in Spain in the form of excess credit and higher real estate prices.

To compound the problems even further, the EU mismanaged matters from the start. Instead of identifying the problem and making southern Europe labor markets more competitive (and thus increase their exports), the EU administered strict austerity programs which weakened these economies and drove debt levels and interest rates even higher.

Again, the Germans are to blame here. To make southern Europe labor markets more competitive would have resulted in wage inflation in Germany. There is still an inflation paranoia among German central bankers since the hyperinflation of the 1920s Weimar Republic led to the rise of the National Socialists (the Nazis). Germans avoid inflationary measures like the plague.

The austerity measures forced on southern Europe pushed the Eurozone to the brink of collapse. Sovereign interest rates skyrocketed above the dreaded 7% level and creditors worried that governments would be unable to finance their runaway deficits. In July 2012, the Euro was briefly rescued when European Central Bank President Mario Draghi proclaimed they will do “whatever it takes” to save debtor nations.

To be certain, all is not well in Euro land. The austerity programs are causing a political shift as hard right-wing nationalist parties are increasingly winning seats in parliaments. This will lead to less political cooperation and more economic turmoil. Unless Germany takes it upon itself to allow domestic inflation and adjust the imbalances, there are more dark days ahead.